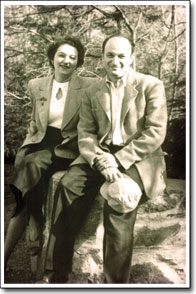 The late Milton Steinberg is the author of the literary masterpiece As a Driven Leaf, first published in 1939 and still regarded as a major influence on contemporary Jewish life and thought. Steinberg died in 1950 while working on The Prophet’s Wife, which is now in print for the first time.

PRAISE FOR AS A DRIVEN LEAF
By Milton Steinberg

“Perhaps so completely frustrated a life has never before been presented in fiction. Sheer beauty!”

“A windswept novel of a turbulent age strangely like our own.”

Ari L. Goldman is the author of The Search for God at Harvard and Being Jewish, and the former religion correspondent for the New York Times.

Rabbi Harold S. Kushner is the author of When Bad Things Happen to Good People.

Norma Rosen is the author of Touching Evil and Biblical Women Unbound.